Remember the wooly mammoth? It was a large, hairy ancestor of the elephant that thrived during the ice ages. Overhunting and rising global temperatures led to its extinction, but recently scientists have decoded 80% of the creature's genetic code, raising the possibility that we will one day in the not-so-distant-future see one in real life. Will it once again range the Earth freely? No, more likely it will be sustained in a lab or a zoo. Perhaps McDonald's will come out with the McWooly.

Remember the Chrysler auto company? It was a large, hairy ancestor of the Hummer that thrived during the oil era. Gas guzzling and rising global temperatures led to its extinction, but recently the Executive branch of the government stepped in to resurrect it with a $17.4 billion dollar get out of bankrupcy free card. Coincidence? I think not. 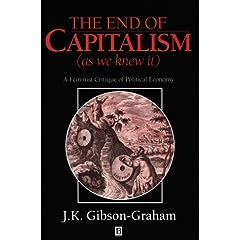 Do the recent collapses in the auto and securities industries represent the dying coughs of capitalism? No. Contrary to common belief those industries were not capitalistic, and haven't been for a long time. In that sense, capitalism has been writhing around on the ground for a while. Although they may have been necessary in the short term, the bailouts amount to kicking capitalism while its down.

What should we do? Can capitalism be saved? I say it can, and I have an idea of how to do it...

First, it is important to realize that capitalism works in much the same way as evolution:

there is a diverse field of competition for limited resources, and the fittest survive to fight another day. The auto companies, like a lot of old industries, have become big, clunky dinosaurs in the modern era. There is no longer a diverse field of competition, because the car companies offer the same old gas-guzzling crap and if they all fail the government just gives them money anyway. If capitalism were to work itself out, then we would expect it to happen by new car companies starting up and try something new. If they are fitter for the present economy, the auto startups would take over the market. But there's one problem for capitalism working here: capital. None of the existing companies have the capital to try anything risky (like seriously marketing a hydrogen-cell car) and nobody else has the capital to create a start-up car company. Are we stuck? If so, we are screwed. There is hope. Another business that is becoming a relic of a bygone age is gold mining. The mines are running out of gold, and it is too expensive to risk digging in new places. Nobody has the capital to create start-up gold mining companies. But one company found a successful work-around. Goldcorp did something completely unprecedented in the gold industry: they made their gold maps public and held a competition in which anyone who could find gold would get part of the treasure. The Goldcorp Challenge worked brilliantly: new sites were found and the company jumped from a $100 million failure to a $9 billion success story.

This is not the only place this worked. Another outdated beast with high production costs is space travel. Until recently, there was no real competition--only governments could afford to send people into space. That is, until the Ansari X Prize inspired 26 teams to spend a combined $100 million dollars to figuring out a low-cost solution to putting a person into orbit. At first, the task seemed insurmountable, but in 2004 Scaled Composites won the prize 8 years after it was announced. What should the U.S. government do to save the auto industry? Not what it's currently doing. It's giving out free money to the very companies that were selected against by the economy. That's like trying to resurrect the wooly mammoth in our post-ice age modern world. Instead, the Senate should allocate funds towards an H-Prize: $500 million to the first company to market an affordable Hydrogen fuel-cell powered car. Or something like that, anyway…you get the idea!

Making competition based auto payouts would not signal the end of capitalism, but the return to capitalism. It's well worth the shot.

Posted by astrobassist at 1:55 PM