Can’t We All Just Get Along?

Why is it that Red Sox fans don't fight each other? Is it because we are all the same, that we live in peaceful harmony, always agreeing with each

other and never arguing? Nope. During a typical game, while sitting rather peacefully in my seat, I will have beer spilt on my by some drunken jerk, have my view blocked by some idiot standing up in front of me to take 12 pictures, and have chewed peanuts sprayed on me by the lady in the seat behind me who's yelling, "A-ROD'S AN A-HOLE!" But I love them all, because we are all Sox fans. We have laughed, cried, screamed, cried, and rejoiced together. We have sat, stood, and kneeled and prayed together. And that shared suffering, that shared jubilation, unites our souls forever, and any adversary from New York or otherwise be damned.

You may have noticed the resemblance between the scene I have described and a typical Catholic mass. In fact, the similarities cut deep, very deep…

The only place I have been to that rivals the childish fighting between Red Sox and Yankees fans has been at a meeting between creationists and evolutionary biologists. They screamed at each other, pumped their fists in the air, stamped their feet, and I heard almost every insult short of "Oh yeah, well you're a poop-head!" hurled from each side. The reason for this fighting is much the same as the brawls at Fenway. Each side, through their shared dreams, hopes, and experiences of suffering and jubilation, has constructed a shared worldview that cannot be questioned.

One common criticism that has always been raised against science is that it offers a cold and belittling picture of our insignificant place in a mechanistic universe, while religion puts humans at the spiritual (if not physical) center of a warm, vibrant universe that was given to us as a gift. I'm here to say that it doesn't have to be this way!

Who Created Whom in Whose Image?

ever could tell you about God. Ever notice how only funny people claim that God has an infinite sense of humor? Or that the embattled and persecuted Jews from the Hebrew Scriptures viewed their God as testy, vengeful, demanding, and at times almost irrational? Or how the ancient Greeks, as they uncovered the wondrous insights of geometry, mapped these principles into their view of the Heavens and the Earth's place at the center of the Celestial Spheres?

I think the reason that science is perceived to give a cold, mechanistic view of the universe is for

much the same reason--this is the view that was held by the cold, impersonal scientists who came up with the big theories. Newton, for example was reported by those who knew him to be a misanthropic prick. It is only natural for such a pompous genius to assume that universe must conform to his own values of logic and mechanism—hence the clockwork universe that needs no further care once set in motion.

I argue that this bleak picture of the universe is really not indicative of science, but rather of the scientists who conceived it. It doesn't have to be this way. Whether you believe in God or not, I believe science can paint a picture of the universe every bit as wondrous and welcoming as that held by believers. All it takes is a change in perspective.

Tiny, but Not Insignificant

The more we study the universe, the more we find out how small we are compared to it. Space is mostly, well, space. If the Sun were the size of a grapefruit, then Earth would be a pencil point 30 feet away. Pluto would be in the next town, and you’d need a microscope to see it. The nearest star would be another grapefruit, on the other side of the country, with nothing in between. Once you realize how much nothingness there is in the universe, it makes it really special that we are part of something.

We, all of us, are on the same little blue speck of dust, hurling around a little bright dot on the far

reaches of a dinner plate hurling through an infinite space at unimaginable speeds. What if there is nothing else; no afterlife, no spiritual realm—what then? Then that would mean we were all in this together, this 'life' thing, with all the joy, suffering, love, and pain that comes along with the human experience. We are all rooting for the same team. If nothing else, can't THAT make us get along?? 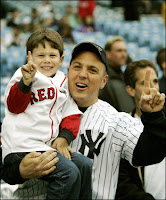 Posted by astrobassist at 9:38 AM

I think some folks are uncomfortable with feeling insignificant. Sometimes folks feel more at ease if they think that everything in the world was made for them because somehow they were the special ones.

the point I was trying to make is that the scientific worldview, contrary to popular belief, CAN make us feel special AND significant.