When it rains it pours. Here’s why.

I have been doing a final project in math class on how long it takes a cement square to completely saturate with rain at the start of a rainstorm. Inadvertently, I missed my last class to do gather some observational evidence in Mallorca, Spain. 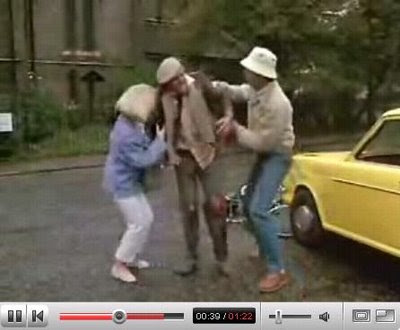 It was, as a trip, comparable to National Lampoon's European Vacation, and I was Clark Griswold. I will spare you the details expect for a highlight real: it poured rain the whole time, my uninsured rental got keyed, and I ran over Eric Idle while he rode on his bicycle.

The pinnacle (or whatever is opposite of pinnacle, that is) of the madness was when the rental car broke down in the most precarious spot of road ever invented—a hairpin turn on the side of a mountain with a cliff on either side. Actually, with the magic of Google maps, I can show you. It was right here:

Just for fun, here's a contour map, and if you've studied your contour maps (you have, right?) you will see it's WICKED STEEP:

The car battery just died as I was making the turn. Since we were going up a hill, I had to back it down out of the dangerous curve. Since the power steering was dead, I had to back it into the wrong lane. Since it was in Mallorca, we had no working cell phone and thus we had to stop cars by hand to ask for theirs. Since they were all tourists, they didn't have any either.
And since we were in such a dangerous spot, I got to wear a sweet yellow vest (that really tied my whole outfit together) and we had to put up a danger triangle. Here's a pic of me directing traffic in my snazzy vest: 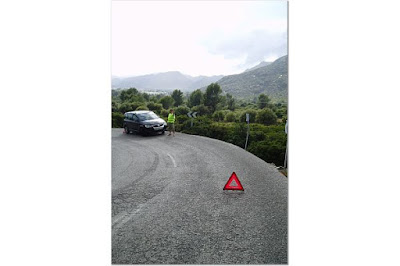 Just when we flagged down the most amazingly nice French couple who offered their help, all of a sudden a lightning storm surrounded us that was so fierce it seemed as if God was trying to personally smite us after a few glasses of Mead.
One thing I noticed as I stopped traffic to (a) prevent a disastrous cataclysm and (b) find a cell phone, I noticed something on that road. It never seemed to be one car that went by, enabling a safe stopping for help. It was always a cluster of cars and buses meeting perilously at the bend in the road, even if it was 10 minutes since the last car came by, making it a completely dangerous situation every time. (wasn't Avis so nice to tell us to just "deal with it")
Why do cars always cluster in the worst possible way? Why do bad things come in three's (or in the case of this trip, bazillions)? I can see 2 answers to these questions:

I think the real answer is a little of both. And the solution is acceptance. At best, you will see less bad things happen. At worst, you won't be able to prevent the bad things from happening anyway, so you might as well accept them so you can move on.
I think Tom Robbins puts it best in his classic Another Roadside Attraction. The narrator notices how Amanda and John Paul Ziller walk through the Seattle rain:

"They strolled calmly and smoothly, their bodies perfectly relaxed. They did not hunch away from the rain but rather glided through it. They directed their faces to it and did not flinch as it drummed their cheeks. They almost reveled in it. Somehow, I found this significant. The Zillers accepted the rain. They were not at odds with it, they did not deny it or combat it; they accepted it and went with it in harmony and ease. I tried it myself…I got no wetter than I would have otherwise, and if I did not actually enjoy the wetting, at least I was free of my tension. I could even smile."

And so we tried, on that precarious bend in the road, to smile. And the French couple that was helping us smiled. And more people stopped to help us. In fact, one of them road over our danger triangle and destroyed it. Instead of thinking, "oh great", we laughed. Eventually Avis came around and gave us a new rental. We made it to the top of the mountain, and the clouds broke, offering us one of the most amazing scenes I have ever taken in. 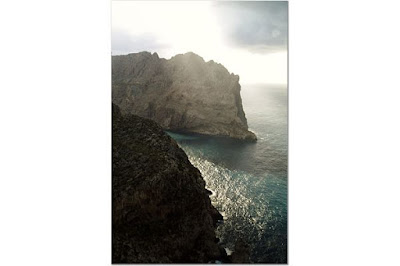 I think the answer, expressed in its most direct form, was taught to me as a poem by my father when I was young:

and while you smile

and soon there's miles and miles of smiles

Posted by astrobassist at 10:59 PM

I think the word you are looking for is "nadir." Is in, "This trip was the nadir of your life."

THAT's the word, thanks! And I think the nadir of my life was probably Physics 606: Electrodynamics, but this part of the trip was definitely up there, er, I mean, _down_ there.

I smile. I smile at you.
Because it will drive away the blue.
and give us a view.
of the lovely smile
that visits for a while
on your calm and gentle face
thus providing us a tension-free space.
:)