In Frisian, a language spoken in certain unforgiving regions of the Netherlands, the word for 'cheese' is tsiis, pronounced “cheese”. They say this when smiling for a photograph, just like we do in America. I can’t imagine the two regions happened upon this usage independently; one must have influenced the other (or perhaps both emerged from a common source). A more clear case of the spreading of cheese (sorry, bad pun) is in Japan, where it translates to saying “cheesu” for photographs.

The astute reader will realize that the whole point of saying “cheese” for a photo is because it makes you smile. The Japanese, in adopting this ritual, destroy its point; when you say “cheesu” you spend more time going “oo” than “ee”, thereby greatly increasing the chances of looking like an idiot in the picture. This is an example of a strange loop.

A strange loop is something that, through self-reference, destroys its own meaning. For 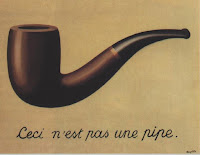 example, take a look at the GIF of the reproduction of the painting of the pipe on the right there. It’s by Magritte who, being French, was very strange indeed (just kidding, all my French readers…Vive le croissant!). The caption says “Ceci n’est pas une pipe.” This translates to “This is not a pipe.” On the one hand, you say “What the hell is it then?!” On the other hand, you say “Of course it’s not a pipe…it’s just a representation of a pipe…it’s just blobs of ink on a canvas, and has no inherent meaning.” The kicker is, once you see it that way, you also must agree that the phrase “Ceci n’est pas une pipe” is not really saying “This is not a pipe,” but rather is just more meaningless blobs of paint on the page. So, realizing the true meaning of the phrase destroys its meaning. That’s a strange loop.

The most important of all strange loops, perhaps, is Godel’s Incompleteness Theorem. The basic idea is that Kurt Godel used mathematics to prove that mathematics is either incomplete, or inconsistent. If it’s incomplete, then there are true math equations you can never derive by using math. If math is inconsistent, then there are false mathematical equations that you can actually derive using math consistently. Either way we’re screwed.

Here are some more examples of strange loops:
· Catch 22
· Russell’s paradox
· Throwing out the baby with the bathwater
· Sprint Wireless customer service

There is hope for the portrait photographers of Japan, thanks in part to my dad (Hi Dad!!).

There is a grassroots movement to change the word that people say during photographs over there to “Whiskey”. I should have guessed that these

confounding strange loop things could be solved by whiskey. I submit, however, that it should be changed to “beer”. Beer makes you smile more, after all. AND, the great philosopher Homer (Simpson) has already taught us that beer is “the cause and solution to all life’s problems”. Oh damn, that’s another strange loop!
Posted by astrobassist at 6:46 PM

and Master Joshu said, "to seek the blog comment is to deviate from it"

How interesting, Im also a breakdancing phyicist with an interest in strange loops... Im not pro tho.